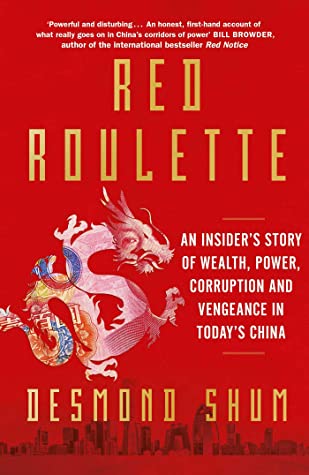 Red Roulette is a tell-all story of a nouveau riche Chinese millionaire about how he and his business partners had to navigate the immensely corrupt Chinese government to get things done. Perhaps triggered by the sudden mysterious (but not totally unanticipated) disappearance of his wealthy ex-wife, Shum leaves no stone unturned in revealing the immodesty, shamelessness, and brutality of the Chinese government. In doing so, he also opens up about the grey practices and behind-the-doors politics that he and his wife indulged in to gain financial leverage that ultimately made them rich.

The author, after awakening to the fact that China wasn’t so much “opening up” to privatization and democracy as he had felt through the years, eventually left China for a more liberal life in the west where human rights are acknowledged and celebrated.

The book is written in a bloggishly simple style without dramatizing real-life events as many biographies tend to do. I don’t think it offers fundamentally eye-opening facts about how China works and the antics that the Chinese Communist Party follows to silence dissidents. Much of it is fairly common knowledge for anyone with the slightest interest in world affairs. Still, it’s an evidence-based affirmation that what the world thinks about China is mostly correct.

What emerges from the book is this picture of China – the so-called “red aristocrats” (sons and daughters of high-ranking politicians) live outrageously affluent lives that are completely detached from those of commoners. Many western-educated, ultra-rich business persons recognize the flaws but willingly mine the system to make profits, and employ devious tactics to ensure the system never changes. The rich are rich beyond imagination. But everyone in China – big and small industrialists, entrepreneurs, showmen, and politicians – is at the mercy of the Chinese Communist Party.

Jack Ma, where are you?