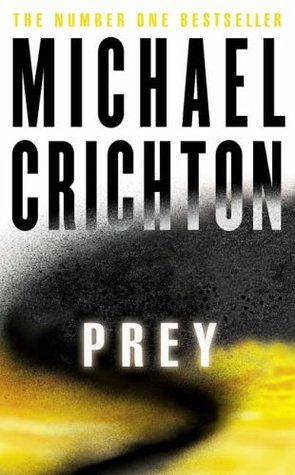 I don’t think Michael Crichton is a name unfamiliar to any lover of the science fiction genre. I’ve always associated Crichton with only Jurrasic Park, knowing well that many more popular works came from him. So, whenever I saw Crichtons on fiction shelves I hesitated to pick one up thinking his most important work had already been told a million times. I was wrong to do that!

Prey is, what the critics describe, a classic Crichton—a cautionary tale of scientific misadventures. Written 20 years ago, the novel narrates the story of a nanotechnology and artificial intelligence experiment gone horribly wrong. Having worked on AI and machine learning myself, I felt a huge deal of respect for the author for studying and predicting a field in its infancy (at the time of writing) with stunning accuracy given how ML has evolved today. This novel gets a 5/5 from me purely for the science part of it. For the other parts, it’s a mixed bag.

Overall, it’s a good sci-fi book with a lot of potential which, unfortunately, was never fully realized. A thing apart from the science part that the author has gotten really well is the depiction of Jack Forman. His thoughts and emotions are captured masterfully. Plus, the use of short sentences to describe quick thinking and tense situations is impactful. Sadly, some obvious plot holes and an underwhelming climax left me wanting more.

P.S. I could personally relate to Jack’s experience with his 9-month old daughter.

P.P.S. I got this one as a Christmas gift from my secret Santa at Automattic.