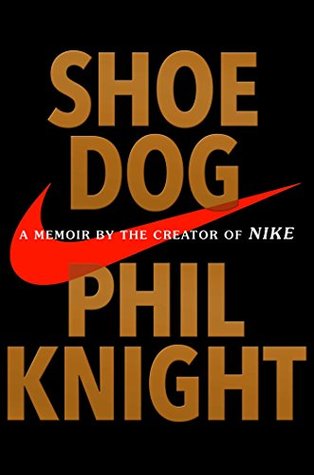 “We strolled past the lions and tigers. I told her that I flat-out didn’t want to work for someone else. I wanted to build something that was my own, something I could point to and say: I made that. It was the only way I saw to make life meaningful.”

This quote pretty much summarizes the mood of the book. It’s one book that’s brutally honest.

Shoe Dog is the story of Nike’s shy and publicity-averse co-founder Phil Knight told in an almost exuberant writing style with a flair for the dramatic. It follows Knight and his child-like curiosity during the early years of his company.

Dramatic and humorous are the two most accessible words to describe my impression of the book, though I’ll add that I mean “dramatic” in a good way as if to describe a fantastic fiction book. The writing is so good that I suspected that the book was probably written by a ghostwriter and not Knight himself. It was later revealed to me as J. R. Moehringer.

The details about Knight’s early travels are very well explained: so much packed in so few sentences! And the characters. Ah, the unforgettable characters! Marlboro Man, Blue Ribbon’s first major competitor. James the Just, the judge on Nike’s court case against their original shoe manufacturers. Bureau-kraken, the bureaucrat at the US Treasury Department. I loved the nicknames. There are plenty more!

In no way does that make the various intriguing and often precarious predicaments of Nike’s former CEO any less fascinating. Perhaps most entrepreneurs lacking experience but brimming with conviction would have gone through similar encounters and affairs. It’s refreshing to learn about the travails of one of the most recognizable brands in the world.

The prologue (Dawn) is super awesome. It precisely summarises my feelings and thoughts about the meaning of life and leaving a mark. Great choice of words, too! The epilogue (Night) is like a satisfying sequence of post-credits scenes we find these days in movies based on true events.

Shoe Dog is an excellent read for any aspiring entrepreneur. Truly enjoyable!